To encourage and promote the culinary expertise of young Chefs under the age of 27 (Competitors must be born on or after October 1, 1990 to be eligible) by exposing them to a competitive environment with their peers. This competition will offer the opportunity for the Jeunes Chef Rôtisseurs to showcase their talents and creativity in a fair, unbiased, and professional forum.

The first competition was organized in 1977 in Switzerland to support and promote future young chefs by giving them the opportunity to demonstrate their skills. Competitions are held at regional, national and international levels in countries around the world that have a strong Chaîne presence. The competition was started in 1990 in the United States and continues to grow every year. It has been featured on the TV Food Network and CNN. Our winner in the United States in 2011, Reilly Mehan, went on to win the International Young Chef Competition put on by the Confrérie de la Chaîne des Rôtisseurs. His culinary career and life have been changed forever as a result of this competition and his experience.

In the USA, competition begins at the regional level. Proprietors, managers, chefs and culinary instructors at Chaîne affiliated restaurants, hotels, culinary schools and Chaîne members within each of the ten regions of the Bailliage des Etats-Unis can propose candidates, who complete and submit application forms to a Regional Coordinator, the Conseiller Culinaire Provincial. Contestants are then selected from the group of applicants.

We are delighted to announce that the Chaîne’s National Culinary Weekend is going be held in the Washington, DC area in one of the most beautiful times of the year, May 5-6. The city will be in bloom, the weather should be mild and spectacular, and the DC dining scene has never been more robust and interesting.

Congratulation to Our 2016 Winner! 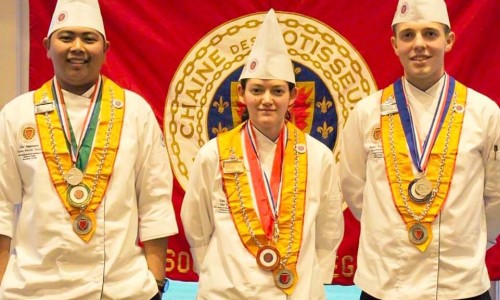 Congratulations to Lyn Wells, our 2016 winner of the best Jeunes Chefs Competition. Congratulations also to second place finisher Kevin Maier of the Southeast Region and in third place, Ian Sagayaga of the Hawaii/Pacific Islands Region. We also want to congratulate all of the young chefs that competed this year.

Maître Rôtisseur Susan Notter won our first ever National Pastry Competition. Congratulations to Susan and all the other chefs that participated in this competition.

Each competitor is given an identical mystery “market basket” containing a few key ingredients, and is to design and prepare a three-course meal to serve four people using those ingredients—all in four hours’ time! Such is the challenge given young cooks competing in the Chaîne des Rôtisseurs Jeunes Chefs Rôtisseurs Competition.

If you are interested in competing (and meet the eligibility requirements), contact the Bailli or an officer of the Chaîne Bailliage in your community or our National Office to indicate your interest.